My first post of the A to Z challenge had a name before it had any substance. I knew I would give it the title ‘A.R.T.’ But I wasn’t sure what A.R.T. would stand for.

The initial idea or A.R.T. take one was rather rude and I have decided it was not my place to expand it any further. Who am I to judge after all. So I have moved onto exploring different angles and ideas.

A.R.T. take two stood for Artificially Ripened Tomatoes. I was very happy with the topic. You could layer it with many interesting issues from what we eat, social justice, morality of our food, deforestation, changing weather patterns and how this affects harvests, global warming etc. However the more I thought about it, the more it started to feel like one of my study assignments (I am battling the environmental studies at university). And although I strongly believe all these topics are important and should be explored, I also want to have some fun. For this reason I have abandoned artificially ripened tomatoes too.

A.R.T. take three took a journey in completely opposite direction into unadulterated silliness and I named it Armed Radical Tigers. I’d like to think it is a rather apt name for a secret feline organisation working in disguise on Earth. I have a cat (or vice versa) and as anyone sharing their living space with a feline knows, they are visitors from a different dimension. However this uber-secret underground society started to take over and I had to acknowledge that it wants to be more than just a post starting with ‘A’. Therefore I have scrapped this idea as well (but only for this particular challenge; I am definitely planning to flood the cyberspace with nonsense about  a secret feline agency).

At this point I was faced with the reality of slowly running out of time for the first post of the challenge and the possibility of missing the deadline. Bad start. So I have unboxed the original idea and although it feels like running blindfolded with scissors, not to mention hypocritical as I try not to be judgmental about things, people and art especially, I have decided to clutch the scissors tighter and run anyway.

This rather offensive description was a reaction to a piece of art that I have crossed paths with recently and prompted an inner discussion on what does deserve to be called art. The post then was meant to finish with the picture of the aforementioned art piece and an open question inviting further bashing of the poor artist.

But. I also (consciously) make an effort to be objective. Plus I am more than aware of my many shortcomings so I was a bit apprehensive about throwing fire bombs on an artist I know nothing about. So I have researched him. And you know what? He happens to be a one cool dude.  All that vile revolting feelings that poisoned me have started to fade. Now I could understand his point of view. What he was trying to express. And although I am still not very keen on the particular piece that introduced me to his work, I can now appreciate it.

During this process I have realised two things. First, some art cannot survive in the real world. It can only flourish in the safe haven of white walls in art galleries and museums. Second, how we perceive art is only partially the work of the artist. It is very much influenced by the art curators. And in this case, the curator has f-ed it up big time.

So it is not the art that deserves to be called A.R.T., it is the person who ripped the piece from its rightful environment and stuck it inside a glass globe where it is slowly dying because its roots are missing the vital nourishment of its natural habitat.

I was tempted to include the name of the artist and later the name of the curator, but have decided against it. It’s not really relevant or necessary. And I guess there is a third thing that I have realised or actually the thing I was trying to achieve – being objective – that to understand someone you have to step out of your emotions and listen to the other side.

A in the A to Z challenge 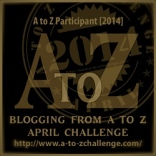 Daydreaming as a profession

Daydreaming and then, maybe, writing a poem about it. And that's my life.

A bit of this, a bit of that, the meandering thoughts of a dreamer.

Mountania Travel Agency offering Adventure tours to Slovakia, Iceland, Greenland, Caucasus - Georgia, Nepal, Bhutan and other countries. In each country we cooperate with local certified mountainguides. We prepare an authentic holiday for you based on our own experience from each country.
Out of Print

Fiction authors and their shorts

the writings, musings, and photography of a dream smith

The greatest WordPress.com site in all the land!

The ordinary is the magic.

MY OWN PRIVATE IDAHO

My words will either attract a strong mind or offend a weak one.

Turning Tears and Laughter into Words

The Dictionary of Victorian Insults & Niceties

Together we can give the nineteenth century a voice in the twenty-first century.

Through the Lens of my Life

thoughts and images from my perspective